Attention all travellers and travel lovers!

There has been an image included with a link making the rounds online that shows a boarding pass that would put customers “on the wing” of any Ryanair plane.

This is a scam!

Ryanair have released an official warning to everyone of an “online scam” that is targeting Facebook users.

In a post across its social media accounts, the airline pointed out that a supposed ‘offer’ of two free Ryanair tickets for the company’s 35th anniversary was fake.

The link is posted with an image of a fake boarding pass, with the logo of Ryanair included.

Eagle-eyed travel lovers on Facebook were able to spot that the image had a few discrepancies.

The ‘ticket’ had a Qantas flight number and the seat number – 4K – would put the customer “on the wing” of a Ryanair jet, as one person pointed out.

A preview of the scam image can be seen below. 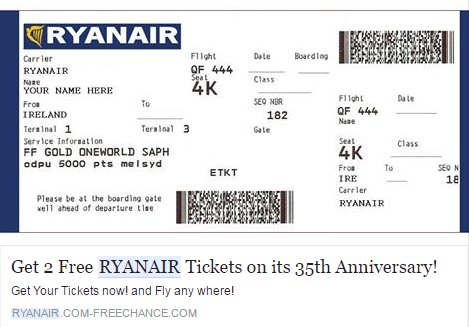 The firm said in its posts: “Please be aware of an online scam offering free Ryanair tickets. This is not an official promotion.”

When any of these “promotions” are offered on social media, it is always best to check the profile is verified or the company have made an official comment on the promotion.

Subscribe
NI Travel and Tourism Magazine
×
IT'S TIME TO PUT SOME
Sign up to our newsletter and get everything you need to know for your next adventure!
Your full name
Your e-mail address
Adventure Awaits
×
ADVENTURE
IN YOUR INBOX